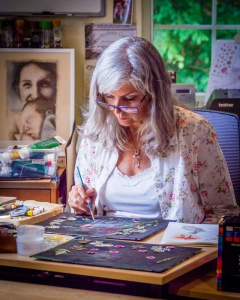 Beautiful Brusho Animal e-course is a great way to experience the fun and fabulous colours of Brusho Crystal Pigments. During this self-paced course you will be guided on what colours to use and how to apply them, taking the pigment out to create interest and texture and using masking fluid to give a glint in the animal’s eyes. There are five animals to paint in this fun course three big cats, a horse and an owl! A veritable menagerie!!

For more information and to registration for Beautiful Brusho Animals click here for the Course Catalogue.

For the rules and detail for the Beautiful Brusho Animals and Brusho Gift Package check out the Aritsts’ Blog.

I really did learn from the first lesson…people do birch trees a lot, and I have always been envious, but have never known how to do it with backgrounds and dramatic effect .. Jan gave me the tools to accomplish that. This picture could not have happened for me without the video. I think the use of bleach was of course the most obvious technique learned, but the negative painting and background, and the color combinations, and I guess one thing I can really appreciate is this…I have watched other instructional videos from other people, and I learned to paint the one picture, but you give information to carry over for creating other pictures as well with the technical points you make, and this carries on into each of the lessons. I learned so much from them all.

I was not sure how the class would work, thinking it was like a live & I needed to be there at exact times. I was very relieved it is a step by step at your own speed, such a relief, not feeling the imaginary pressure. Haha. Also, what a fabulous job Jan did on the entire introduction to the product, including the safety of using these products. I wasn’t expecting that and think Creating Magic with Brusho deserve a 10+ just on that part. I haven’t touched my brusho since I bought it in May 2017 played with it to maybe Sept 2017. It’s been on the shelf since I used it intermittently that year. You just made everything familiar, easy & the Bleach & Milton I had never seen step by step before. I am really impressed by the amount of thought & coverage that has been included and all the work putting all of this together and keeping everything in real time, oh and the patience shown by the Instructor!  Truly I would recommend Creating Magic with Brusho course to anyone. I watched everything in Lesson One but haven’t gathered all the supplies to do the painting yet, but I feel very comfortable. I did swatches before but not your method which is brilliant! I never even noticed that colors clumped or reacted differently, makes sense but didn’t play enough or make notes. Things I do with regular watercolors but didn’t even occur to me with Brusho. So, I thought that was another 10+ Bravo moment to the Instructor. This is the closest to being in a real live class, only better no commute time! Jan really, great job!

Creating Magic with Brusho is a fabulous course which I would recommend any artist interested in understanding how techniques can affect the artists style and how Brusho can create some amazing paintings. More than 10 out of 10!